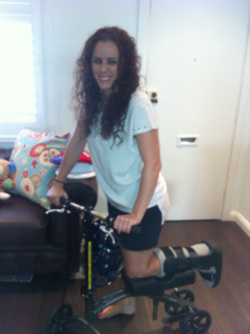 "Just when I thought there was no hope, I found the knee walker. As a stay at home mum I was distraught when I cracked my ankle. Not only did I struggle to get around on crutches, but they meant that I wasn't able to stand up and move around with my 6 month old son.

The knee walker provided me with the ease to move about pain free, whilst also being able to carry my son at the same time. Without the knee walker I would not have been able to manage as well as I have.

It is easy to use in the house, out and about on the streets and in shopping centers. Movability and fast do not go hand in hand with a lower body injury, but add in the knee walker and your 6 weeks in a cast or boot won't seem as bad." 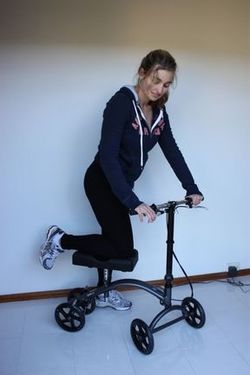 ​"I recently tore the ligaments in my ankle while kicking the soccer ball with my son. I rented the knee walker for 2 weeks after seeing someone else on one at the doctors. Luckily my ankle wasn't fractured! By staying off my ankle totally for the first week, my physio told me I'd saved myself two weeks worth of recovery. I didn't use it as much in the house in the second week, but it was still worth having at work so I could move around the office more freely. As it is so light there were no problems getting it in and out of the car. Well worth the money!"

"The Knee  Walker saved my life! After a serious soccer injury where I tore my Achilles tendon and couldn't move. I spent a week on crutches and was dreading the next 8 -10 weeks. A friend told me about the knee walker and I am so glad that they did. Alan was there the same day that I called him. He made sure that the knee walker was the right for my height and gave me a basket for free. The knee walker became my best friend for the next couple of weeks. I was able to take the knee walker to uni on the train, out to dinner with my girlfriend and of course to watch all the soccer games I was missing out on. Would recommend the knee walker to anybody!" 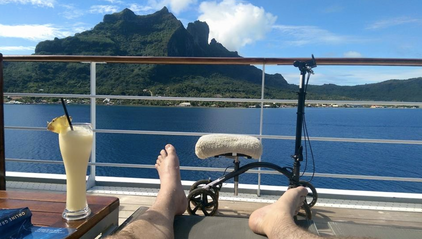 “This contact was the best thing I ever did during my hospitalisation and time in plaster.  I had a reconstruction of the Achilles Tendon and two osteotomies in the ankle. The kneewalker enabled me to feel almost human again to get around on.  I am fiercely independent so there were chores to be done and hey, like all the other photos, I was out and about in no time.  The kneewalker was easily stored in the car boot or even back seat without any problems folding and unfolding.  The padded wool seat over the rubber also made it softer for my knee and leg (I had plaster up to about 3 inches from the knee joint itself).  The carry bag and basket were just the icing on the cake as they did not interfere with the folding/unfolding and everything was close to reach when using them too.

I can’t tell you the number of people who saw me getting around so well in the house (without damage to furniture I might add!), and the suburbs I visited and friends I was able to see too which was really important to me as I was in Sydney from Perth for this hospitalisation.

Everything just worked for me from the moment I made the phonecall to have it delivered, paid for over the phone and then the return pick-up.  I was able to claim a lot from my private health fund so this was another added bonus for me.”  from Marianne Jurcun, Perth.

This is the company I would use again and again and now that I have experienced it, anyone one of us ‘oldies’ could manage it.


"Your knee walker saved my life.
I even took it on my trip to Tahiti! Thank you."

" I just wanted say a big thank you to Knee Walker Hire.  I had a planned major operation on my foot which took over eight weeks to recover from.  The knee walker was used from day one as putting any weight on the foot was extremely painful. Even around the house the walker was handy during the early days. Once I returned to work after a week recuperating at home, the walker made getting to and from work (by bus) and around the office extremely easy and less stressful.
Having had the same operation on the other foot a few years earlier using only crutches and the compulsory boot I can thoroughly recommend the knee walker.

I wanted to say a very big thank you for the loan of ‘Shaun’. (The knee walker reminded me of Shaun the Sheep with his furry back and little black face!).

I don’t know what I would have done without Shaun. He made little things like getting a cuppa to the table possible, and despite initial animosity towards the cat and her tail, they eventually became friends.

Unfortunately I had to pull the pin on touring NZ with the Symphony as the pain was too much, however Shaun did manage to accompany me recently to Vanuatu. He really came into his own at the airport, and was invaluable at the resort getting me to and from the pool.

I’m kicking myself (with my good foot) that I didn’t hang onto him this week. The long hobble between Circular Quay and the Opera House every day would have been so much easier on wheels. Fortunately things are getting better every day.

Thanks for sharing Shaun with me over the past 6 weeks. I really appreciate the extremely reasonable hire fee, no doubt they’re not cheap so you’re doing an invaluable service to those of us in need. It was nice to meet your daughter also, she’s done a great job with the website.

Thank you Allen. I’ll keep an eye out for you on the skiffs! 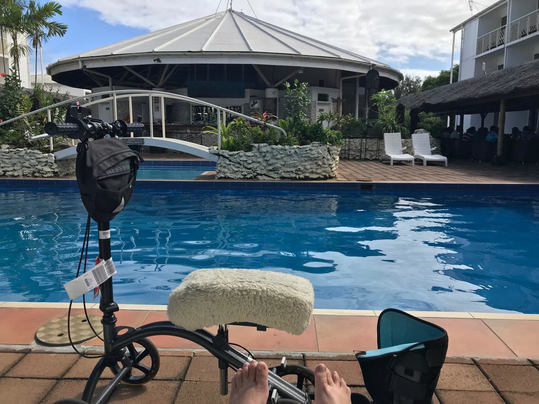 Consult your medical professional as to your suitability to use the knee walker before use.
Knee Walker Hire Sydney, Australia           Phone: 0411 577 476
Rent a knee walker today!